I recently saw a post #FacebookCensorsPostsFromBlacks
And decided to follow up or see if its fake news....
The shock tat met me ,is that the post is big and shares from the blog were alot, but very rare on Facebook search engine.
I decided to interrogate further which pages shared or wrote or co wrote about Black racism on Facebook consciousness and mind liberation.
I saw a page i wished to like and next i saw these the following advise. 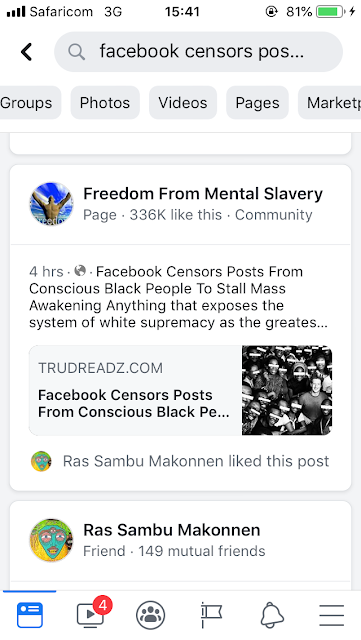 So  I found the article and i saw some of my friends had even liked it.
i decided to go further and investigate

Other Related Posts
Being Part Of Something 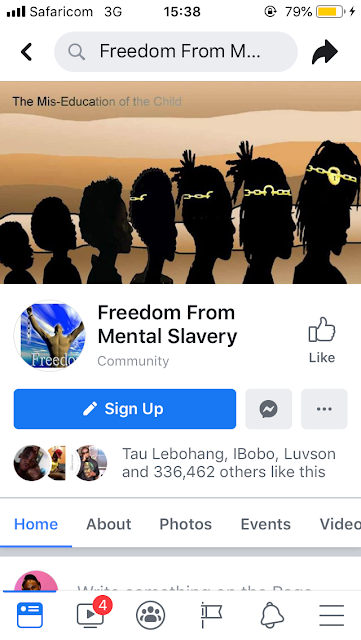 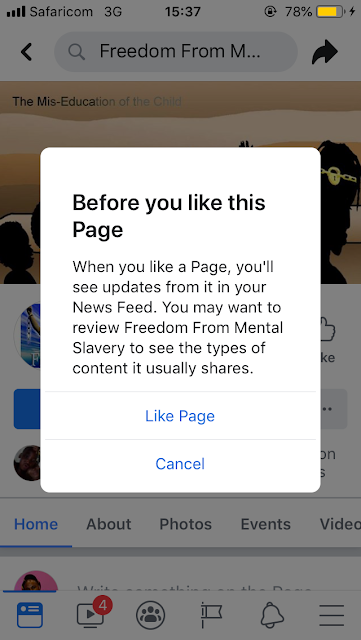 This is what Facebook started by asking me ,something i have never seen following any other page or even comedy and facist whites pages....ofcourse because i like hering the booth sides of the story.
Even though i went ahead and tried others i went back and liked the original page. 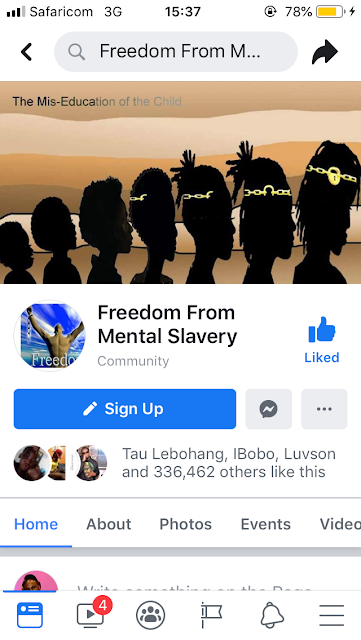 Anything that exposes the system of white supremacy as the greatest threat to humanity is flagged as “hate speech”
Facebook is the world’s largest media outlet in the world, and the white supremacists who manage the company have no intentions on allowing the melanated masses to use their platform to increase the consciousness of ‘huemanity’.
Although I am extremely aware of the embedded racism within Facebook’s policies I still use it for the sole purpose of connecting with ‘curious melanated minds’ around the world. Unfortunately, with trudreadz.com being a newer platform, I’m still dependent on finding external sources of traffic to bring in new subscribers. Out of all the social media platforms I use, Facebook brings in the most traffic by far. Ironically, Facebook gives me the most trouble out of all the social media platforms.
It seems like every week one of my post is censored for one reason or another. Sometimes it’s an article I shared, other times it’s just a photo. I thought it was just me until I started noticing other people from mostly black groups I’ve joined say the same thing. Then I started paying attention to the trend.
It wasn’t long until I noticed that many of my post had a low organic reach as well. I know that Facebook changed some things so that ‘everyone’ had a lower organic reach, but some post I’ve had recently were exceptionally low. In the same day, I could share an article that reaches 5,000 people, hundreds of reactions and shares and then my next post would reach 4 people. This definitely not normal considering at this time I have over 4,000 people follow my Tru Dreadz Facebook page.
Anything that exposes the system of white supremacy as the greatest threat to humanity is flagged as “hate speech”. Ironically, all up and down my news feed is evidence of white supremacy’s crimes against humanity. So basically Facebook is saying it’s ok to broadcast mass murders, police brutality, white collar scandal, and other forms of white domestic terrorism but if the victims of these crimes speak out it is “hate”.
That’s when I had to take a step back and remember who and what we are dealing with. Of course Facebook will sensor posts from black people and other melanated minds, that’s what white supremacist do.
What is the system of white supremacy? A system designed to prevent the genetic annihilation of Caucasians by the masses of genetically dominant melanated humans on planet earth.
Keeping this in mind, why would the largest social media platform operated by white supremacist allow ideas and information to flood their outlet that could potentially increase the consciousness of the melanated masses? They wouldn’t. So rather than spend my time campaigning against Facebook’s policies I continue to use the platform to drive traffic to my blog (while I’m not on restriction) and build a larger following on other platforms such Instagram or Twitter. Also keeping in mind that white supremacists manage those platforms as well.
In other words, I expect to be censored or restricted by these platforms. The thing is once enough people are subscribed to trudreadz.com notifications I won’t be dependent on white supremacists owned outlets to allow me to post my content for ‘curious melanated minds’. I will have my own way of distributing content so nothing they can do will stop me. Even if my social media accounts do get restricted on those platforms, there would still be so many people sharing my content directly from trudreadz.com they wouldn’t be able stop the flood of content for ‘curious melanated minds’.
I refuse to put myself in a situation where I have to compromise my message in order to please Facebook’s racists policies and guidelines. One way or another, the message will get out.
This what they are trying to avoid, a mass awakening. These days information travels faster than light and it doesn’t take long for millions of people to be focused one topic or idea. One image or combination of sentences could inspire a particular idea within the collective consciousness of melanated minds and change the world within minutes.


When I say change the world, understand I am saying that the universe is mental and the mind is all so by changing what we think on a subconscious level we change the infrastructure of existence. Our thoughts matter tremendously and the last thing a white supremacist owned social media outlet wants is to have content stirring up the consciousness of melanated minds

By Ecspedition at October 07, 2019
Email ThisBlogThis!Share to TwitterShare to FacebookShare to Pinterest
Labels: Common Sense and Life Lessons, Hidden and Government against peoples, Life of a Vocalist, The Southern Kikuyu before !903, Written by Ecspedition