ReUpload Updates: Comet That will End All or most of Life.... 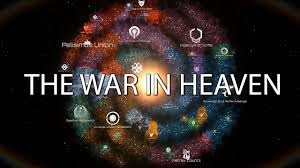 History Certified & Confirmed by
Gratitude and Appreciation to Contribution
In order not of Most or least contribution.

(all of Strip the Cosmos (Discovery Channel) program aired aided revelation on date Theory discovered below.)

First Theorized Monday 18 November
Revelation 12 1-17
War in Heaven / When a Comet ☄️ Hit The Moon.
Why the Moon has Different Crusts
Earth face of 25kms depth craters clattered.
Hidden of dark side 50km Mountainous deep.
These are the words of John The Revelator of the visions and happenings in the years of between 6AD - 100AD
His Skills regarded very Poetic and as a Christian would See events as they happened on Earth.

1 And there appeared a great wonder in heaven; a woman clothed with the sun, and the moon under her feet, and upon her head a crown of twelve stars:
[
Here we see a woman clothed with the sun  possible poetry of imagery painting to show a CIRCLE and moon on her feet or the Light reflected by moon ,THE MOON appear in abnormal circumstances most plausible due to the oncoming shiny burning up object lighting up the sky on a direct collision to the object simply the moon]here the twelve stars shows the poet impression of the 12 corners of the earth by the twelve most shining stars on the skies at night.from the Mercury to Pluto and the their most visible moons .

2 And she being with child cried, travailing in birth, and pained to be delivered.

[These is a poetic writing telling that it was almost in the evening and the moon was almost coming out ,the child is the light which is reflected from the sun]

3 And there appeared another wonder in heaven; and behold a great red dragon, having seven heads and ten horns, and seven crowns upon his heads. 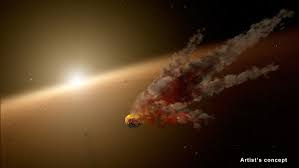 [Here comes the Comet ☄️  the ten heads are the break away red material from the burning pieces of the comet,the horns are the trails of the laser-like bright light, the crowns are the glare by refraction of the evening sun rays, just like when a camera is faced to the sunlight]

4 And his tail drew the third part of the stars of heaven, and did cast them to the earth: and the dragon stood before the woman which was ready to be delivered, for to devour her child as soon as it was born.

[Here the comet is raining red hot stones showers to earth while almost head on to collide with the moon,and since the comet is burning red it is devouring the light of the moon or out shining it]

5 And she brought forth a man child, who was to rule all nations with a rod of iron: and her child was caught up unto God, and to his throne.

[Here we see the Moon give birth to a new creation of ;those who study know the face like side of the moon is composed of 70% iron which is permanently or always facing the earth and CAUGHT UP unto God or meaning it remained on the Orbit just like the other stars in heaven ; Throne of God.]

6 And the woman fled into the wilderness, where she hath a place prepared of God, that they should feed her there a thousand two hundred and threescore days.

[Here we see the fragments of the old moon pieces that broke off due to impact fall into the sky of space to continue recreating and eating up more of other rocky dust and particles in space as all te other material is while in motion in space as mankind devised that it was by God,unlike falling to earth] <notice the period is 1260 days the only possible time the slow flying fragments would have been seen by eyes and the then mirror scopes as they fly out till dimming off once very far out>

[Here the writer,presumes that as the dragon stopped burning up ,because the writer is  christian ,it is angles fighting against it and the dragon and its angels could not fight the ark angel of planets Micheal ,of course the dragon could  not win it would burn off]

8 And prevailed not; neither was their place found any more in heaven.

[ And we see the dragon or here in truth the comet ☄️ fade due to burning out after impact,this is why it is no more found in heaven as it is {eaten] or bonds  by moon and becomes dark]

9 And the great dragon was cast out, that old serpent, called the Devil, and Satan, which deceiveth the whole world: he was cast out into the earth, and his angels were cast out with him.
[We understand that a comet ☄️ on trajectory to earth would be dangerous,so it is the satanthe serpent or the devil, this is the deceiving of people that it could be end of all life ;called devil as we refer to bad and the bearer of fire

10 And I heard a loud voice saying in heaven, Now is come salvation, and strength, and the kingdom of our God, and the power of his Christ: for the accuser of our brethren is cast down, which accused them before our God day and night.

[now the Sound as reaching the earth after the big collide referred by the poetic writer of the exhaustive power of collision...; the accuser being the comet ☄️ of our brethren the Moon cast down the shining burning trail remainders into earth.We again see the reference of day and night to be the evening when the moon and the sun are almost both lighting the earth and as also when was thought that the comet ☄️ would stop the formal day and night when the moon would have been thought to be destroyed that day altering the plan of God for day and night.]

11 And they overcame him by the blood of the Lamb, and by the word of their testimony; and they loved not their lives unto the death.

12 Therefore rejoice, ye heavens, and ye that dwell in them. Woe to the inhabiters of the earth and of the sea! for the devil is come down unto you, having great wrath, because he knoweth that he hath but a short time.

[Here we see heavens Rejoice since the war of the moon and comet ☄️ had ended woo was to the earth as the raining burning remains fall into earth but fell into the sea,the short time of devil or dragon or comet ☄️ remainder would be distinguished when it feel into the sea,as the short time]

13 And when the dragon saw that he was cast unto the earth, he persecuted the woman which brought forth the man child.

14 And to the woman were given two wings of a great eagle, that she might fly into the wilderness, into her place, where she is nourished for a time, and times, and half a time, from the face of the serpent.

[Here we see the poetic writer state that the woman or the old moon is flying away into space as if with two wings or two splashes of moon rock ,translating to a big chunk from the middle and small stones from left up and below which would have been very visible easily from earth,The wilderness is the space,and that would continue feeding into space rock and other stars from the time of FACING THE SERPENT;here showing it would return after it was full,where in bible language is 100*100+50 years [Time,and times,and half time] possibly predicting the end of the earth in 10050 years from the time of writer.] <now considering that everything on the skies goes round these one comet ☄️ or its remainder as the trajectory is followed by the rocks of old moon here the WOMAN ....it appears that the Comet takes 10050 yrs to go round its orbit>
{here we can predict when since John the writer lived between 0-100 AD or After death meaning period after Jesus meaning a possible Apocalypse possible at the year 10050]

15 And the serpent cast out of his mouth water as a flood after the woman, that he might cause her to be carried away of the flood.

16 And the earth helped the woman, and the earth opened her mouth, and swallowed up the flood which the dragon cast out of his mouth.

17 And the dragon was wroth with the woman, and went to make war with the remnant of her seed, which keep the commandments of God, and have the testimony of Jesus Christ.

[And we see the great frustrations on earth by the Tsunami like wave created my comet splash...disturbing the humans and all life as since we claim life came from a star...here showing that the writer believed in life coming from the sky and also as from God since it is the human and nature that keep the commandments by growing and man as being just as God intended.]

John of Patmos (also called John the Revelator, John the Divine, John the Theologian, and possibly John the Apostle; Greek: Ἰωάννης ὁ Θεολόγος; Coptic: ⲓⲱⲁⲛⲛⲏⲥ) is the author named as John in the Book of Revelation, the apocalyptic text forming the final book of the New Testament.  }
By Ecspedition at November 20, 2019
Email ThisBlogThis!Share to TwitterShare to FacebookShare to Pinterest
Labels: African Culture and African History, Bible And Science, Future Possible Outcomes and Prophecies, Life of a Vocalist, Written by Ecspedition