Now i will cut to the chase just for you mama land earth.
This war was not engineered intentionally like it might seem...But the whole truth was the secret best kept many years by black-man.real African.
The real story is only revealed little by little but something hinted to me by elders and my own grandfather got me researching.
How could customs and culture of children of Israel the chosen of God lead to this much war of Race in color?

Well if you never heard before it was the curses and tradition that started it all..
Africans had believe that a child born Caucasian “albinism or pure white without melanin was a curse.
Yes that child was abomination and should not be kept or let live among “chosen of God” for that reason after trials of medicine men sacrifice and offering to gods and the child never got normal ‘black’ it was decided that,that child is a cast out and should be thrown in the forest forever or for hyenas to lavish on.

But this is where the magic happened ,not all thrown out children died or disappeared some mothers for love of their children kept in touch and fed and protected those cast out to the forest caucasian child the famous “albino children” .

It is important that people understand that in African taboos and culture few more people were considered cast out and chased into the forest eg the robbers or thief,murderers,rapists... 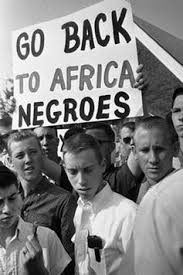 Now all these cast out never died but rather conjoined forces to one day regroup to a place where they would live in peace and no one would harm or reach them... due to skin care and remedial search by albinos the whites cast out expedited on expedition to find a place where their akin would be not sick from the hot sun and acid waters of equator.

When the albinos had numbers and regrouped they decided that they would have to revenge against the ancestors and Africana families which chased them out of holy land.

The biggest of their tricks was to use God against them and successfully encroach Africa back with weapons to eliminate the former hostile families.

To this day it has never been in good terms whites or albinos people living with melaninized Africans .
By Ecspedition at April 02, 2019
Email ThisBlogThis!Share to TwitterShare to FacebookShare to Pinterest
Labels: African Culture and African History, Life of a Vocalist, Written by Ecspedition