The First Trial to Orchestrate Kenyan Rebellion By Politicians for their Personal Gain.

The main agenda behind too much borrowing against stealing everything 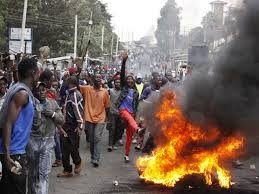 It is good knowledge for leaders to know what tools they have under their belly and what can work for them and not...
But when it comes to politicians it feeds their ego to know people will fight against themselves for the sake of our people kind of leader.
It adds more weight when politicians realize the people can fight against themselves when they are hungry..but fight together against an enemy who would confront their peace or homely discourse or non-unity.

And this is what fascinated the telecoms giant Safaricom CEO Micheal Joseph to even come up with the Phrase Kenyans are peculiar ..
the peculiarity is the current government confidence and has led to uhurus too much borrowing and extensive stealing by everyone and anyone who can...knowing only too well that;
If the debt got too high and the Chinese wanted part of our resources as payment guarantees....that then the country would start to go into chaos...

And with that knowledge what has Uhuru done...

*They the first family’s Odinga, Mois, Kenyatta orchestrated a rebellion by:*

1: Bought into all major and minor milk producers...
2: Bought all major banks and merging with others note Mpesa included...
3: Bought major media companies and reporting daily theft in government by incomers.
4: Pushed Kenyans further by Registering them to a new number and ugly knowledge tender offered to OT MORPHO same election rigging company.
5: Same time went ahead and added taxes to fuel...and food
6: Then they introduce housing income tax
7: Then they leave to China again for more borrowing hoping it all gets bad and uprising against government or rebellion to the system.

Then Kenyans would rebel
And as usual against a common enemy, as they would not keep calm to see someone overtaking their resources.

Then there would be an uprising to change the system, and Kenyans would rebel on all foreigners on the soil...hoping to do so even with the government...officials

And then in the middle of the night, the same thieves would attack the economy once more by transfer of funds and reallocation of more properties and land... By the dawn most of them would leave the country conspicuously for “their safety” their children are already out.
After lefting of foreigners and rebel against everyone not Kenyan, they would keep calm and in one week start experiencing amnesia due to the pain of deaths and destruction...

The Grieve would be calmed by the same politicians who fled... and now they would return with their dirty money...lots of it...and since the stole major projects and all foreigners are out...Kenya would start rebuilding and politicians would start investing their stolen money and later call on all foreigners to come and add more investment to the new born child... hoping all the old debts would be cancelled now they would offer airport and sea hubs as insurance as people would be too frustrated with destruction...and also majorly because kenyans do not sustain a two weeks rebellion...unlike the forefathers MAU MAU.
By Ecspedition at April 29, 2019
Email ThisBlogThis!Share to TwitterShare to FacebookShare to Pinterest
Labels: African Culture and African History, Hidden and Government against peoples, Written by Ecspedition